PARKING IN WEST END
We are receiving complaints from Gloucestershire Highways that the gritting lorries can’t get through the Town when vehicles are parked on double yellow lines on both sides for the road between The Wheatsheaf Hotel and the Market Place.
PLEASE can you help us to discourage drivers from parking in this area ?

NEW CLERK FOR THE TOWN COUNCIL
Catriona Crompton will be replacing the current Clerk when she retires at the end of May.  Catriona will begin a 3 months training period and handover in March.

IT’S THAT OLD PROBLEM AGAIN !!
The Council has received so many complaints about dog mess that Members will be considering banning dogs completely from certain area of the Town.
QUEEN’S JUBILLEE
Are you interested in getting involved with organising an event to celebrate the Queen’s Jubillee?  If so, please contact the Town Council Office.
ADVANCE NOTICE
Darren Isbell, Development Manager of Bromford Group will be attending the March Town Council meeting to talk about Bromford’s interests in Northleach.

The Annual Town Meeting this year will be held on Wednesday, 18 April at the Westwoods Centre.  George Hudson of Farmington Trust will be speaking about the work of the Trust and the part it wishes to play in the future of Northleach.  Further details will be available nearer to the time.

There have been many complaints about the timing and phasing of the lights which appear to be changing too quickly for drivers leaving the Town.  These complaints were passed on to Gloucestershire Highways who have looked at the problem and made changes but some drivers are still concerned that they are being ‘stranded’ as the lights change.

Highways tell us that the lights on the A429 do not change to green until all vehicles are clear of the junction.  The lights will only change to red when the road sensor picks up that there are no vehicles (within a certain time limit) but the lights will change sooner when there is only one vehicle, later if there are more.  This will have the effect that some vehicles will appear stranded between the white line and the turning.

The number of cars being let through (east and west directions) on green is a separate issue.  This will always vary as it is dependent on the flows on the main A429.  The more traffic there is on the A429 the less time there will be for traffic emerging from the minor road.  All times are sensor driven with the A429 taking priority.  It may sound complicated but is all designed to keep traffic moving.

Gloucestershire Highways will be repairing the wall supporting the road
at East End and the road will be closed :

50m east from Junction with Nostle Road and East End
for approximately 200m east along the East End Road.

PLEASE USE AN ALTERNATIVE ROUTE

A thorough inspection of Gloucestershire County Council’s roads is underway to determine what affect the severe weather has had.
The past two winters have caused major problems on the roads with the council repairing around 90,000 potholes in 2010 alone – more than the previous three years combined.
Following the bout of snow and freezing temperatures throughout December and early January, it is likely that the roads have suffered further damage.

Today, Cllr Stan Waddington, cabinet member for environment, went out with one of the inspection teams to see for himself how the county’s 3,500 miles of roads have fared.
Initial reports show that while there is damage on the network, the scale of repairs is not as bad as last year.
Cllr Waddington said: “It’s no secret that snow and ice cause the roads to crack, which leads to potholes forming so I was keen to see for myself how this latest bad weather had affected us.
“We know there are still some problem areas and we’re working hard to address that – but in actual fact, at first glance, the situation seems better this time round.
“We repaired an unprecedented amount of potholes last year and we carried out a lot of work to seal the roads against bad weather and this has helped prepare the roads for this winter.
“Within the next couple of weeks, the full inspection should be complete and we’ll have a clear picture of the task facing us in 2011.
“Whatever we find, please be assured that we are taking action and that we will do all we can to repair Gloucestershire’s roads.
“However, as we all know, money is tight so we will continue to prioritise what we do.”

The inspection team will start by checking the main road network, before moving onto major towns, then to urban and rural areas.
As problems are found, they will be reported and the most severely damaged will be repaired first.

Anyone who spots a pothole can report it to Gloucestershire Highways on 08000 514514 or online at www.gloucestershire.gov.uk/pothole.

Coming from the north, forecasters say the snow will fall during the early hours and again during tomorrow morning accumulating to between 2cm and around 9cms particularly on higher ground.
However, the snow will turn to sleet and then rain by mid-morning turning most of the snow to slush.

Temperatures are expected to fall to just below freezing but will rise over the weekend and into next week.
Tomorrow morning, drivers will need to take care on the roads.
Tips on winter driving can be found online at www.gloucestershire.gov.uk/winter.

While the council will do all it can to keep roads free of ice, residents are also being urged to do their bit too by helping to clear pavements.

Last year people were worried about liability issues after clearing ice and snow themselves.
But new guidance from the government on gritting your own driveways and pavements is now available on www.gloucestershire.gov.uk/winter and people are being advised to ensure they’re prepared before bad weather hits.

Current Weather Conditions:
All areas: A few snow showers at various points of the county, overcast with temperatures currently just below freezing.

East:  Ploughing on key routes continued until 21:00/22:00 (20/12/10), and recommenced from 04:00 this morning. Gritting being carried out on Cirencester Key Routes this morning. (Route C7 Only – due to breakdown when other routes were completed)

Central: Key route grit of 15g carried out at 23:00 on 20/12/10. Scouts across the area were out in the early hours and additional salting and ploughing currently being carried out at hazardous locations on the key routes.

Proposed actions during the day/night:

All areas: Treatment decision for the next 24 hour period will be made following receipt of the forecast due at lunchtime. 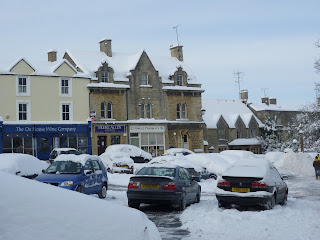 All areas: Treatment decision for the next 24 hour period will be made following receipt of the forecast due at lunchtime.