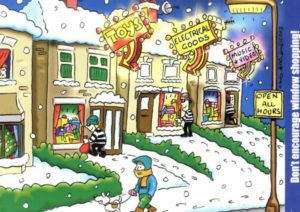 This is the time of year when it’s getting darker earlier and people are preparing for Christmas by making more purchases. Regretfully we have had a number of police messages come through this week relating to local break-ins, vehicle thefts and in particular burglaries from outlying buildings. So it seems like a good time to remind everyone of the police advice:

Please pass on these messages to your neighbours. A well-lit and occupied street will help to deter opportunists.

We have just heard that there are some people going around Northleach knocking on doors and trying to sell things. This has been reported it to the police but please report it yourself if you wish. Below is previous communication from the police about this with some information on “Nottingham Knockers”, 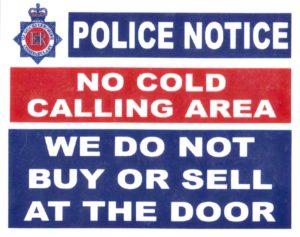 which is the generic term for this type of seller. A “no cold callers” sticker is attached that may be of use.

This is a message from the North Cotswolds Local Policing Team. Please continue to encourage your members to report similar incidents in the future so that these door step sellers may be discouraged from entering Gloucestershire.

Here is the advice from the Local Policing Team and Neighbourhood Watch: END_OF_DOCUMENT_TOKEN_TO_BE_REPLACED

A few residents at East End have notified us that they had doorstep callers last weekend, claiming to be on a criminal / youth rehabilitation programme and selling household goods. Incidents have also been reported this week in Moreton. Commonly called the “Nottingham Knockers” they usually offer self-produced “permits” which are worthless. Genuine Pedlar’s Certificates are relatively hard to come by and the majority of these callers will not have one. One of the requirements for issuing a Pedlar’s Certificate is that the applicant does not have a criminal record, so anyone claiming to be on a “Criminal Rehabilitation Programme” should be a good warning. Many people feel intimidated by these callers and will buy goods just to get rid of them.

I have spoken to the Local Policing Team and Neighbourhood Watch and they have issued the following advice:

A scam is a scheme designed to con you out of your cash. There’s a scam out there for everyone. If you
let down your guard and think that you won’t be fooled, then you too could become a victim.
Scammers are becoming more sophisticated and aim to con us all. Bogus sweepstakes and lotteries, get-rich quick schemes and fake health cures are some of the favoured means of separating the unwary from their money.

But the number of scams just keeps on growing. If you think you have been the victim of a scam,
or suspect a scam, see the back page for what to do. No matter how small the amount of money
you have lost. It is important that the scamsters are stopped.

Read on to find out how to protect yourself………………

Distraction burglary is a despicable crime as the offenders target the most vulnerable members of our society; these people will try anything to trick their way into victim’s homes.

“We the Police will, of course, do all we can to locate the offenders and to investigate this matter fully as we continue to crack down on distraction burglaries across Gloucestershire.

“We would urge members of the public to take extra care of their elderly neighbors simply by watching out for anyone suspicious loitering around or perhaps challenging someone you don’t recognise calling at an elderly neighbor’s house.

“Gloucestershire Constabulary is working with vulnerable and elderly people to make them aware of the methods of distraction burglaries and advise them what to do if a stranger calls, but we need your help. Working together we can ensure vulnerable members of our community are safe and those who prey on them are locked up.”

The following simple steps will help reduce the possibility of being targeted by bogus callers:

We would like to take this opportunity to urge the community to contact Police immediately if they are suspicious of people calling at their house. We would much rather receive calls of suspicious circumstances that turn out to be legitimate than see the residents of Gloucestershire become victims of bogus callers.

Officers from your local Safer Community Team are available to offer you further crime prevention advice. If you would like to meet a local officer contact Gloucestershire Constabulary on 0845 090 1234.

Images and graphics were kindly provided by: