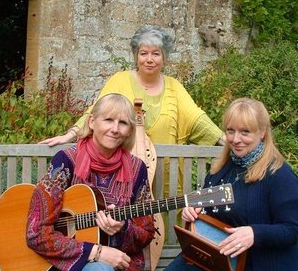 For the last time this spring… Thrilling music and spellbinding yarns from three sparkling performers.  ‘A Night of Music & Stories’ is packed with gorgeous melody and dark laughter.

– Songs reveal otherworldly creatures and vengeful powers, while stories include standing stones and trees with a will of their own!

* A Night of Music & Stories is 2 x 50 minute sets, plus a 20 minute interval
* The show contains adult themes

TINKERSCUSS are sisters Bryony Holden (vocals) and Erin Holden (guitars). This show is a long awaited collaboration with spoken word artist Chloë of the Midnight Storytellers.

Ice cold with a fiery heart – that’s the exquisite Celtic influenced music of Tinkerscuss. Bryony Holden’s powerful vocals weave together with richly intricate guitar by her sister Erin Holden. Their heritage from Liverpool and Ireland shines out in superb musicianship and haunting songs about the magic and mystery of Britain.

The mesmerising sound of Tinkerscuss has enchanted audiences all over the UK for more than 20 years, with albums such as Nine Trees, Classic Tinkerscuss and the acclaimed Sandy Denny tribute Across the Purple Sky winning them airplay on Radio 2, Radio 6 Music and many connoisseur radio shows. Facebook Page – www.facebook.com/Tinkerscussmusic

Chloë of the Midnight Storytellers is a 21st century keeper of tales. Her stories – told unscripted, in genuine verbal jazz – blend tradition, comedy and original storymaking. For 15 years Chloë has captivated audiences from Cheltenham Literature Festival to castles and cruise ships.
– www.midnightstorytellers.co.uk

The three friends have all lived and worked in the Cotswolds for 20+ years.